The History of Women’s Basketball 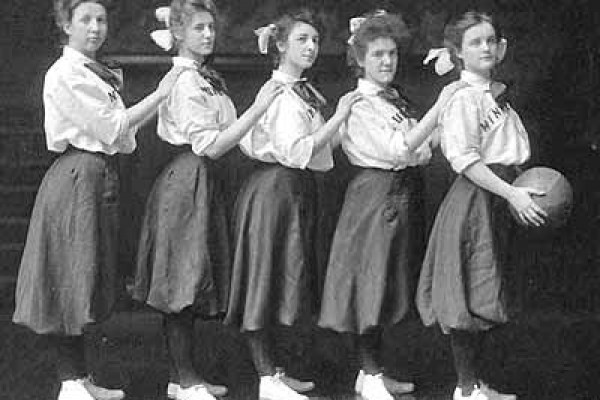 After trying several different games and finding them too dangerous or not quite suitable for gymnasiums, Naismith wrote down the essential rules of basketball, incorporating some of the rules of a popular children’s game of the era, “Ducks on a Pond,” and then nailed a peach basket on an upraised track, ten feet above the playing surface.

Of course, since the peach baskets still had closed bottoms, retrieving a ball after a player scored a basket was terribly inefficient – unbelievably, the game had to be stopped for someone to retrieve the ball with a dowel.

And although the first official game was played in January of 1892, at the YMCA gymnasium Naismith’s handwritten diaries at the time indicate that he was extremely nervous about the new game he invented, fearing that his basketball wouldn’t take.

Oddly, in that first official game of basketball, there were nine players on a side and the winning team won a close fought 1-0 battle with a 25-foot shot – on a court barely half the size of the modern day court! By 1897 teams of five had become standard.

Around the same time, women’s basketball was developed at nearby Smith College when Sandra Berenson, a physical education teacher at the college modified many of the rules for women to play.

As it turned out, Berenson was fascinated by the values of teamwork, fair play and vigorous exercise that basketball promoted and began organizing some of the first women’s basketball games by 1893.

By 1899 Berenson’s rules for women’s basketball were published and by the turn of the century, she was the editor of A.G. Spaulding’s legendary Women’s Basketball Guide which spread her version of basketball across the country to countless physical education instructors across the country.

The same year, Mount Holyoke and Sophie Newcomb College (coached by Clara Gregory Baer) women began playing basketball. By 1895, the game had spread to colleges across the country, including Wellesley, Vassar, and Bryn Mawr. The first intercollegiate women’s game was on April 4, 1896. Stanford women played Berkeley, 9-on-9, ending in a 2-1 Stanford victory.

Women’s basketball development was more structured than that for men in the early years. In 1905, the Executive Committee on Basket Ball Rules (National Women’s Basketball Committee) was created by the American Physical Education Association.

These rules called for six to nine players per team and 11 officials. The International Women’s Sports Federation (1924) included a women’s basketball competition. 37 women’s high school varsity basketball or state tournaments were held by 1925.

The Edmonton Grads, a touring Canadian women’s team based in Edmonton, Alberta, operated between 1915 and 1940. The Grads toured all over North America, and were exceptionally successful. They posted a record of 522 wins and only 20 losses over that span, as they met any team which wanted to challenge them, funding their tours from gate receipts.

The Grads also shone on several exhibition trips to Europe, and won four consecutive exhibition Olympics tournaments, in 1924, 1928, 1932, and 1936; however, women’s basketball was not an official Olympic sport until 1976.

The Grads’ players were unpaid, and had to remain single. The Grads’ style focused on team play, without overly emphasizing skills of individual players.

The first women’s AAU All-America team was chosen in 1929.

Women’s industrial leagues sprang up throughout the United States, producing famous athletes, including Babe Didrikson of the Golden Cyclones, and the All American Red Heads Team, which competed against men’s teams, using men’s rules.

By 1938, the women’s national championship changed from a three-court game to two-court game with six players per team.

In fact, with the help of many YMCA instructors, basketball was promoted throughout the United States and Canada, paving the way for the game to be established as a varsity sport at many high schools. Sadly (and perhaps ironically), the YMCA began to discourage basketball by 1905, fearing that rowdy; belligerent crowds and rough play distracted from the organization’s mission.

But that didn’t matter much as amateur clubs, colleges, high schools and even several short-lived professional basketball clubs and leagues not only filled in the void but also helped promote the game.

Basketball was becoming so popular that the forebear to the NCAA, known as the Intercollegiate Athletic Association of the United States and the Amateur Athletic Union fought for control of the game’s rules and of its future.

A little known fact is that during those first decades, basketball was primarily played with soccer balls, which were difficult to dribble.

Most games consisted of players passing the ball to each other in order to advance it up and down the court. It wasn’t for some time until a ball was specifically designed and made for basketball and frequently basketballs were irregularly made, creating an odd scene for modern basketball fans.

It wasn’t until the late 1940s when college basketball was becoming insanely popular and viable enough to pave the way for the National Basketball Association’s popularity that Tony Hinkle developed the orange basketball that fans are so familiar with. Of course, it should not be forgotten that Naismith was also influential in the promotion and creation of men’s college basketball when he became the University of Kansas ‘ first basketball team.

And believably, many of Naismith’s first students and disciples became important in the history of college basketball including Amos Alonzo Stagg, Forrest “Phog” Allen, and Adolph Rupp.